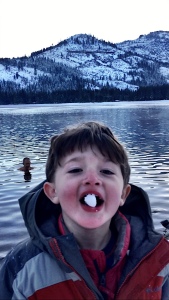 It’s now or never.  I don’t want too, but I promised myself I would.  I’ll be kicking myself for months later if I don’t man up and do this.

“Which way to the lake? We’ve got time for this right?” Mason nods.

I’m committed now.  We drive over the pass. Donner  Lake appears as a  mass of dark water brooding in the valley. We drive along snow-covered roads. The snow-covered houses across the lake look like picturesque gingerbread houses from here.

At the parking lot, some much younger guys are Go Pro-ing their attempts to ski along a rail. “Bathrooms are locked” they helpfully say.

“No worries, don’t need them” I say, privately thinking I can always use that old tactic to warm up a little.

Mason thinks I should jump off the end of the pier.  The thought of going under is terrifying.  I opt to lay out my clothes on the snow on the pier (so I can get some dry stuff on fast afterwards)

I start breathing.  Big deep breaths in.  Focusing on the breath up around my chest. Releasing the breath around the back of my neck, searching for the inner warmth that should come from the brown adipose fat tissue activation.

Gingerly I step in.

10 weeks ago I started an online course called the Wim Hof Method.  Wim Hof is a Dutch man, who according to Wikipedia: “holds 20 world records, including a world record for longest ice bath (1 hour and 52 minutes). He’s  climbed to 21,982 ft altitude on Everest wearing nothing but shorts and shoes, completed a full marathon, above the arctic circle at −20 °C (−4 °F) dressed in nothing but shorts, in 5 hours and 25 minutes. He ran a full marathon in the Namib Desert without water… He demonstrated he is able to directly influence his own Autonomic Nervous System and Immune System. Hof seems to be able to raise his cortisol levels and lower the amount of cytokines (inflammatory mediators) just by using his meditation techniques.”

To prove he’s not just a faker, he gets scientists to test him.  To prove he’s not a freak, he trained a group of 12 volunteers in a University project to do the same thing.  His online course has now trained thousands.  Today there were 9,485 members of the private Facebook page, and the pictures and stories they post are amazing.

When I heard about this on Tim Ferriss’ fantastic podcast with Laird Hamilton, Gabby Reese and Brian Mackenzie I was intrigued.  After watching the Vice YouTube video and hearing Wim on Tim’s podcast I decided to sign up.

Ever the earnest student, I printed the guide, did a baseline for seconds holding breath (retention) and then maximum push-ups, woke early and followed the weekly videos (no you can’t step ahead to the next week until a week has expired).

It’s all filmed at his training facility in Poland.  You see Wim and a handful of students in their gray hoodies and sweat pants sitting on yoga mats in a plain room. His voice is deep (as if coming from deep within his diaphragm) with an infectious laugh, and some hilarious translations (such as “put them in the pelvis” to explain a seated hamstring stretch)

Every morning you do 4 cycles of 30-40 deep inhales and light exhales resulting in a tingly feel as you flush out carbon dioxide and fill up with oxygen.

You will hold your breath 50 to 200%  longer than your benchmark after this first “hyperventilating” cycle.  First surprise.

By the end of the fourth cycle, no matter how groggy you felt getting up, your whole body will feel alive and you won’t even be looking for a cup of coffee.  That is super cool.

After a 5th cycle of breaths, you do push ups holding your breath.  The first time will be more than you did while breathing.  Second surprise.

You then do yoga stretches with a breathing technique (inhale to point of resistance, hold breath for 5 to 7 seconds and focus on releasing blood flow into point of resistance).  You can feel the area release and allow you to go deeper into the stretch.  Third surprise.

Then exercises – headstands (can do), 1 arm crow (success!),and this insanely hard thing called the shelf, which I haven’t mastered yet.  I’d wanted to do a freestanding headstand for years and now all of a sudden it was happening.  Another surprise.

Next, meditation.  5 to 10 minutes. Focus on breathing and the forehead.  You’ll start seeing “stroboscope” lighting in your head.  He says it’s the pituitary gland.  I don’t know what it is, but it’s pretty cool.  The intensity varies (it can be vary faint).  In an earlier post, I shared my experiences with Headspace, and it was nice to try this simple approach

Then the cold showers.  You start with alternating 30 seconds cold then hot, then a minute, by week 7 you’re doing 10 minute cold showers daily.  I won’t say they are pleasant, but within days, you stop gasping when the cold water hits you.

I’m rather compelled by the simple notion that with heating and clothes we’ve lost touch with our ability to regulate our body temperature.   Before civilization, early humans would have presumably died from exposure all the time without this.

All up the routine takes an hour.  If you just do the breathing it’s 20 minutes.  I feel incredibly awake and invigorated every time I do this.  It’s now my absolute favorite way to spend the first 20 minutes of my day.  I’ve been testing different morning routines for the last 2 years including different combinations of journals, gratitude and affirmations, yoga, meditation, and reading.  Breathing wins for me.

One of the young guys filming the skiing came over and said that’s way more interesting than what we’re doing and shot a little action on the GoPro (maybe we’re on YouTube now?) Mason kept track of time and shot the video on his phone.  Cole got bored, wanted to pee, did snow angels, and as you can see, ate snow.

5 minutes in some shivering started. Decided it was time to get out.  Stepping out was fine.  Reaching for my towel and drying off was fine.  Getting the first layers on was fine.  Then the cold blood from the extremities started to hit my core and the shivering started (they call this the “after-drop”).  Apparently vigorous physical exercise like running or pushups can help offset it.  Like climbing a mountain, it’s not over at the top, it’s over once you get back down.  I shouldn’t have lost focus on my breathing.

As the shivering really kicked in, I needed Mason’s help to get those socks on my wet feet.  Getting back in the car, the shivering came on strong.  It took about 1/2 an hour for it to stop.  I was hungry as a horse that night, guess my system got challenged and needed fuel to recover.

Sometimes it’s good to shake things up and scare yourself.  I was more scared about doing this than running the Miwok 100km in 2011, or 50 miles at 10,000 ft in Park City, Utah last year.

What’s it all good for?  Excellent question.  For me, finding the best way to start my day without caffeine is priceless.  Rediscovering new potential, and redefining  what is possible is priceless.

Everything else is just gravy.  Achieving personal goals like freestanding headstands and improving flexibility is cool.    I’m injured right now from running, so I don’t know if it’ll improve my cardiovascular system.  Haven’t had a cold yet, but it’s just the start of winter.  Still get cold hands (Wim suggests training with an ice bucket). I just made a work trip where it was 30 degrees and I didn’t feel the need for a jacket, hat or gloves.  Lighter weight travel is a nice perk.

I hope I can thank Wim Hof in person one day.  Maybe share a beer and a few laughs.  We are all amazing.  As Wim would say “breath motherf#%ckers” or less crassly, “enjoy, have fun with it”.  Namaste.